It is exciting to see God moving through the Church and fanning the flames of city transformation. Historians have documented many Church movements throughout the last 2000 years, so what makes this time special? Perhaps most obvious is that WE are called to participate in THIS movement. Now is our time to answer God’s call to participate in his restoration and redemption of that which was lost. Second, for better or worse, we live in the information age where electrons are overflowing on webpages, social media sites, emails, and databases. How can we tap into the electronic feast we have at our disposal to participate in God’s movement of city transformation?

It is common to talk about “exegeting your city”, a seminarian’s way to describe the process of explaining and interpreting what is going on in your community. In addition to “walking and talking” to learn about your city, I propose that data research is a critical but at times short-changed process that successful city gospel movements must pursue. Why? Often, the story of our city is hidden from the collective consciousness of current residents. Walking the streets and talking to people won’t necessarily uncover the stories that may be lurking just below the surface. Fortunately, we have a literal feast of data at our fingertips.

For example, take a look at figure 1 below which shows the displacement of those in poverty from the central city of Portland in 1990 to East Portland in 2015 (darker colors indicate higher levels of poverty). What is going on?

FIGURE 1: DISPLACEMENT OF THOSE IN POVERTY FROM CENTRAL CITY TO DEEP EAST PORTLAND, 1990 TO 2015

This is part of a long-term process resulting in what I’ve called “Portland’s Ring of Affluent Whiteness”. To see the full story, click here.

If we turn to another city, in this case Atlanta, we can see change in a different graphical format using different data sources. Figure 2 shows how educational attainment varies from Atlanta’s central business district to the outer suburbs. The figure shows how this profile has changed from 1990 to the present. What we can see (the green circled area) is that in 1990, the central city was largely uneducated (around 10% with a college degree). This is markedly different now as nearly 50% of central city residents have a college degree. 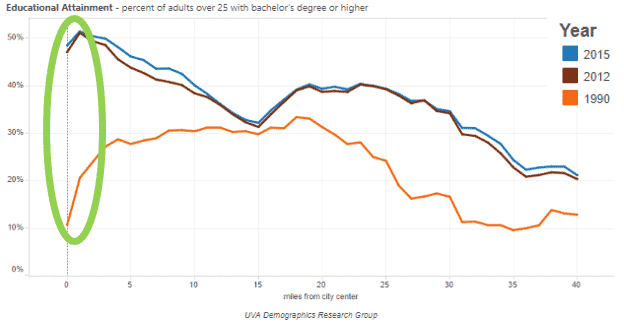 Figure 3 provides another clue to the story in Atlanta, as we see that black residents have moved from predominantly central city locations in 1990 (80%) to being evenly spread in suburbs up to 15 miles from the central city.

These “data anecdotes” exhibit how data can expose underlying currents in a city’s story that may be key elements to explain what is going on today.

One final example will show how readily available data can point to potential focus areas for city transformation work. Figure 4 below shows the distribution of parks and playgrounds in the Portland metropolitan area. The green circled area in East Portland shows a relative lack of public recreation opportunities compared to more affluent central and southwest city locations. Could this data be used by city gospel movement leaders to push for more opportunities for safe places for children and families in East Portland?

FIGURE 4. DISTRIBUTION OF PARKS AND PLAYGROUNDS ACROSS PORTLAND METROPOLITAN AREA

Data is certainly not the full story. The questions we have, the problems or opportunities we see in the data, and the actions we decide to pursue must be grounded in our relationship with people, our relationship with the community, and our calling from God. But as stewards of God’s creation, we are responsible for leveraging the resources at our disposal, including data that in many cases is free for the taking.*

*for an overview of several valuable data resources, including those used in this article, see here.

Dave Kresta is passionate about improving how local churches and faith-based non-profits address poverty, inequality, and other social injustices. He is an Urban Studies PhD candidate at Portland State University with specializations in economic and community development. His research is exploring the role of churches in neighborhood change. Dave has over 25 years of experience in the high-tech and energy efficiency industries, and 5 years board-level experience with faith-based non-profits. He holds a B.S in Computer Engineering from the University of Michigan, and an M.B.A from Portland State. His dream is “to walk alongside the many wonderful leaders of churches and faith-based non-profits, that the name of Jesus will be honored, and that the way of Jesus will again be seen as good news for the poor and broken.”

READ TIME: 5 minutes
As leaders we need to care for our mental health so we can care for others. Here’s a curated list [...]
Read Now
More Topics

READ TIME: 5 minutes
We are here to gather and provide the best responses to COVID-19 all in one place for you.
Read Now
More Topics

READ TIME: 8 minutes
Barna Group wants to help you minister better in your city. You don’t want to take this for granted. Learn [...]
Read Now