Each year in the Minneapolis suburbs of Plymouth and Wayzata thousands of people participate in the Interfaith Outreach Sleep Out “…to raise awareness and funds to prevent homelessness and support local struggling families.” In 2018, 2.4 million dollars were raised.  In the 23 years of this initiative, over 30 million dollars has been raised, helping to prevent homelessness for over 32,000 individuals. Unifying around what we care about brings a powerful result.

Here’s how it all started. In November, 1996, local shoe repairman, Bob Fisher, decided to take up winter camping. The first night, sleeping in his own back yard, he was awakened at 2 a.m. with a clear message, “Take care of the needy people of Wayzata.” Bob said, “I didn’t even know there were needy people in Wayzata.” Bob moved his tent to the front yard with a goal to raise $7,000.00 to buy holiday meals for 100 families.

It didn’t take long; word got out and TV stations began giving him coverage. Within 2 weeks, Bob had raised over $10,000.

He brought the money to the Interfaith Outreach & Community Partners (IOCP) nonprofit in Plymouth. LaDonna Hoy, IOCP Executive Director, helped Bob understand that while a hot meal at Thanksgiving helps some families, there are families who can’t even receive a hot meal. Through her Bob learned about a family of four living in a car in the community after the death of the husband and father.  The complex issues of housing and homelessness represented an even greater need.

For two more years, Bob raised funds by sleeping out in his tent. He would kick things off lighting a bonfire with friends and community members followed by prayer. Then his sleep out would begin.

Bob says, “The Sleep Out is God’s idea.” He knew people would join in. In 1999 approximately 300 Boy Scouts joined Bob in raising money by sleeping out. The next year eight church youth groups joined the Sleep Out. Businesses in the community began sponsoring Bob and others in this community-wide sleep out to raise funds and awareness for sustainable housing.

The Sleep Out had become catalytic! Bob championed the effort. He engaged a cross-sector network around the belief that together their suburban community could do something significant to provide sustainable housing for those in need.

Each year, the Sleep Out begins the first Saturday in November with a community block party, a prayer walk and a poverty-simulation exercise. Bob said, “It’s amazing that there can be homeless and hungry people in a country as affluent as ours. On any given night in Minnesota, some 9,000 people are homeless. Half of these are under 18 and many are as young as 5 or 6. We can all do something. We each need to discover our God-given gifts and put them into action. Obedience is a lifestyle. If God calls you to do something, go after it and stick with it.”

This coming together around what people care about demonstrates centered-set thinking. It is displayed when Christians go beyond partnering around theological beliefs (as people do when becoming members of a church) to join with others to address issues of similar concern. 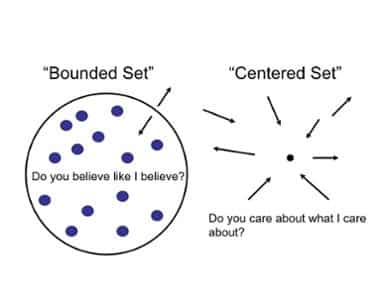 Centered set thinking opens the door to all kinds of unlikely partnerships around nearly every issue that matters in cities and communities. This approach invites people to become engaged in a good cause that will transform lives and create good cities.

Want to hear more about what collaborative leadership could look like in your city? Check out Glenn’s previous article here!

Glenn Barth is the President of GoodCities, a leadership development organization working to advance the gospel for the common good of cities.