What does poverty feel like? Congregants from Macedonia Baptist Church and other churches in Made to Flourish’s Kansas City Network wanted to find out through the Cost of Poverty Experience (COPE) this past March.

Unlike other poverty simulations, COPE lets you step into the shoes of families living in poverty in America. For a few hours, individuals assume a new identity and walk through a series of encounters with the situations and institutions commonly facing our low-income neighbors.

According to Marlo Fox from Think Tank (the nonprofit that created COPE), the stories are real, based on conversations with low-income families in the greater Dayton, OH area. COPE seeks to be “a disruptive experience” that moves individuals personally—and churches corporately—to “a place of heart change and real action,” she says.

It typically takes 15-20 volunteers to run COPE. These volunteers play the part of representatives from a variety of institutions with which the poor commonly have to deal, such as government agencies, businesses, nonprofits, and churches. When Macedonia Baptist Church hosted COPE, some of the volunteers were congregants with personal experience of poverty. According to Macedonia’s Disciple Pastor DeLano Sheffield, the COPE “was a good opportunity for them to be on the other side of the table.” 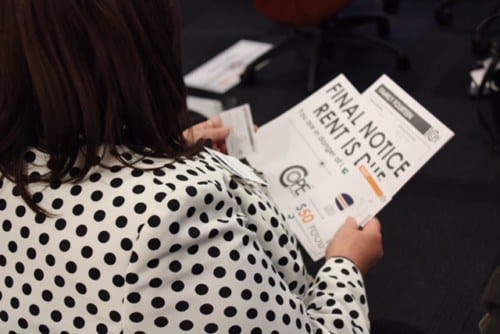 A BROADER UNDERSTANDING OF POVERTY

Macedonia’s Disciple Pastor, DeLano Sheffield, says COPE “gave us a chance to have a conversation about poverty where we could go through the experience and look at it from a lot of different vantage points.”

Sheffield is MTF City Co-Director alongside Gabe Coyle, pastor of Christ Community Church’s downtown campus. Gabe Coyle commends the COPE as an experience that “gave us a broader understanding of how much work it is to survive in poverty.” He adds, “For a lot of white evangelicals, one of the biggest areas of needed growth is understanding the systemic injustices and brokenness that contributes to persistent poverty, rather than just seeing poverty as a result of individual choices.”

“We can tend to be cerebral when we think of ‘understanding,’” says Coyle. “What’s so powerful about the COPE is that it’s intense and it offers an emotional taste of the weight of poverty. And there’s something about that that opens up our willingness to understand poverty differently, to consider, ‘Maybe I’ve been thinking wrongly about this, or not thoroughly enough about this,’ that’s really powerful. When you feel it, suddenly you might be willing to rethink it.”

Both Sheffield and Coyle report that the COPE increased participants’ empathy and understanding. For Sheffield, hosting COPE fit well into Macedonia’s overall efforts to infuse faith, work, and economic wisdom into the church’s DNA. It helps congregants consider more deeply the ways in which they can make a positive difference for their low-income neighbors through their daily callings. As he explains:

Pastors send congregants out each Sunday with a benediction, a blessing. Congregants need to think about how they are being the blessing wherever they go on Monday and throughout the week. If you’re in a position of influence—whether that’s interpersonal or within the broader systems context—you need to be very careful and consider that the decisions that you make (both interpersonally and more broadly) can have effects on people who are less fortunate. If you’re spending your money, if you’re engaging in decision-making about who’s hired, if you know about positions that are open, you should steward that knowledge in ways that are practically helpful for people that maybe you hadn’t considered before.

Coyle adds that the COPE “helps us see and respect the work of the people behind the tables. If you have folks in your congregation who are engaged in those vocations, it’s vital to encourage them and help them see the importance of their work. They have to develop these deep, deep wells of patience that you need when dealing with people who have been so frustrated by the hardships of life in poverty.”

If the more affluent churches are to have a positive, asset-leveraging impact in the community, on the situation of the voiceless and overlooked, they need to have a robust understanding of just how hard our lower-income brothers and sisters have to work, including the hard work of navigating broken systems.

What we walked away with was a more thoughtful question about strategy on how we can begin to how to ‘put redemption’ into the systems that now are not helping people,” Sheffield reports. He and other local congregational leaders who participated are now in dialogue about ways they could respond to predatory lending in the community. Coyle says he’s seen changes in the ways Christ Community’s congregants view the poor. Lay leaders who participated in the COPE are bringing a fresh lens to how they interact with the church’s community ministry partners.

Both pastors targeted leaders within their churches who serve on outreach and benevolence committees and the diaconate. Several of their people had read When Helping Hurts, the book from the Chalmers Center that has helped so many churches rethink their benevolence policies and practices. But COPE made the information “stick” in a fresh way. “I can’t tell you how many times we’ve referenced back to COPE as we’ve talked about how we’re going to engage with poverty in our community,” says Coyle. “It’s become an understanding shift.”

“There’s an overall national narrative about poverty that bifurcates people into camps,” says Fox. “Either it’s all about individual mistakes that people make or all about the brokenness of the system. And the COPE shows that both of those are true. That there are systemic injustices and also personal choices that people make that are not productive, that don’t get us to a place that’s redemptive and fruitful for our families.” What COPE can do, she says, is get people “out of their isolation,” from the homogeneous bubbles we often live in that include only people like us: same race, same class, same cultural background.

USING COPE AT YOUR CHURCH

COPE can be a “turn-key” program for a church, says Marlo Fox. “Mainly the church needs to champion the event and get people there, and we provide them with videos and other materials to help them do that.” The COPE requires a fairly large space (around 3000 square feet). Macedonia used its gymnasium. The cost varies from $1500 to $2100 plus the cost of the facilitator’s travel. It can be used with groups from 25 to 120 people. (At Macedonia Baptist Church, about 75 people attended the COPE at Macedonia.)

Both Coyle and Sheffield are planning on running future COPE events. Sheffield comments that Macedonia has some 1200 members. “For real change to happen here, this understanding of poverty has to permeate the whole church body from top to bottom and side to side.”

Dr. Amy L. Sherman is a Senior Fellow at the Sagamore Institute, and author of Kingdom Calling: Vocational Stewardship for the Common Good.